The Location of Aratta 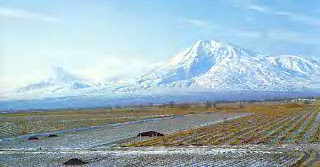 Before making our remarks on the location of Aratta and the relations it had with Sumer, we deem it necessary to summarize some of the salient features of the four variants of the Sumerian epic tale which is, in general, based on the interrelationships of the lords of the two city-states. Aratta and Erech.

1. Inanna, the goddess of love and war, first belonged to Aratta where she had her temple, but later Enmerkar took her to Erech and built there the temple Eanna for her.

3. In one variant of the epic tale, Enmerkar demands the submission of the lord of Aratta, in another he asks he asks Aratta’s help to save Erech from the siege laid by the enemy Martu; at other times it is the lord of Aratta that demands Enmerkar to submit to him.

4. There are exceptionally close political, religious, and cultural ties between Aratta and Erech.

6. Enmerkar demands that the people of Aratta come down and build temples and shrines, particularly, the temple of Eridu.

7. As for transporting construction materials and craftsmen from Aratta to Erech, there is mention of a certain river and some unusual fish in the river, as well as water vessels which Enmerkar is supposed to build.

8. On his way to Aratta, Enmerkar’s emissary passes seven mountains going “from one end of Anshan to the other. “ This does not mean that he has crossed the Anshan range from one side to the other, but rather that he has gone “from one end to the other” in its direction, passing on his way seven (other) mountains, the most important of which was Mount Hurum. It is probable, therefore, that Anshan is the Zagros range which stretches from Elam to Vaspurakan, to the west of Lake Urmia.

9. On the road from Sumerian Erech to Aratta there is Mount Hurum, which Kramer assumes to be the home of the Hurrian people in the neighborhood of Lake Van. For the location of Aratta we find the following indications in the epic tale:

a) As it was just said, between Erech and Aratta, in the vicinity of Lake Van, there was Mount Hurum of the Hurrian people. Writes Kramer: “The Hurrians, as it is well known, lived originally on Mount Hurum, the region about Lake Van.” According to this indication, this mountain corresponds to the Haria highland below Lake Van where is the Uruatri range (the Ararad range, as mentioned by Khorenatsi). Therefore Aratta was situated above Haria-Uruatri. Since Mount Hurum was between Erech and Aratta, Aratta could not have been situated in the east of Lake Urmia, in the region of the Caspian Sea, because in that case, first, Mount Hurum would not have fallen between Erech and Aratta, and, secondly, Aratta’s metal and stone mines would have been far and out of the water-ways leading to Sumer. Aratta’s mashmash presumptuously states that he will subdue all the lands above and below, from the sea (the Persian Gulf) to the cedar (Amanus) mountain. If follows, then, that Aratta was situated directly above these regions, and not so far as the south of the Caspian Sea.

b) In the epic tale mention is made of a river and vessels to transport the construction materials from Aratta to Erech. In Mesopotamia the only navigable rivers leading to Sumer are the Tigris and the Euphrates; therefore, the reference must be to one of these rivers. This is a second proof that Aratta was situated in the highland where the headwaters of the Tigris and the Euphrates were. The details in the tale suggest that for the identification of this river we should consider particularly the Tigris and its important tributary, the Greater Zab, since both pass through the region or the vicinity of the Haria-Hurum highland.

c) A third proof that Aratta was situated around the upper streams of the Mesopotamian rivers is provided by the fact that the grain was transported to Aratta by pack animals and not by boats; obviously it would have been extremely difficult to navigate upstream.

d) Having in view the Greater Zab-Tigris waterway, we think that the mentioning of the Unusual fish in the river is very significant. This is not a figment of imagination in a legend but represents a reality. In fact, there is, in these regions, a certain species of fish that is unusually large for a river. Before the Second World War I have had personal experience of seeing some of these giant fish, about two meters long, that were brought to Mosul, cut into pieces and sold. It was incredible, indeed, that such a huge fish could live and grow in a river.

There is an interesting tradition in that part of the country today which, I think, must be somewhat related to the existence of this fish of uncommon size. Near Mosul, on the small hill of the ruins of Nineveh, there is a village called Nebi-Yunes. In the mosque of this village (built on the site of one of the oldest Christian monasteries that stand on the ruins of a pagan temple), in a deep and dark room, there is, hanging from a wall, a big bone, which, the natives traditionally believe, belonged to the fish that “swallowed the prophet Jones.” (In fact, Jones has been identified with the Babylonian fishgod Oannes.). It seems probable that the remote past (probably from Assyro-Babylonians) related to a kind of big and unusual fish that lived in the river nearby.

Sargon II in his invasion of Mana encountered a river called Aratta. This river could have been far from the city-state of Aratta and still carry that name merely by repetition, just as it is the case with two Haburs (one a branch of the Euphrates and the other of the Tigris), and the two Ararats (one in the south in Kortuk, on the eastern Tigris, and the other in the north on the Arax river). According to Sargon’s statement, the Aratta river appears to be the northernmost branch of the Lesser Zab, whose source is near Kelishin (south of Musasir) in the southern part of the Vaspurakan range and, perhaps, is reminiscent of the old name of this highland. From this region originates also the Araskh (


Thus it becomes apparent that the name Aratta (or Ararta) belongs to the group of place-names in the Armenian highland which are formed with Ar or Ara. It follows, then, that Aratta turns out to be the oldest city-state of the Armenian Highland known so far, dating from the beginning of the third and possibly from the end of the fourth millennium B.C., the memory of which persists, most probably, in the name Ayrarat.

https://www.youtube.com/watch?v=hPiuS6UUc1Q&list=WL&index=16
Very interesting but very much needing to be redone in HDef as hard to hear and understand but clearly showing pre Summerian writing in stone. Dr.T Hooker goes into detail about the burials with the snake motif, the club of Vishnu and the Staff of Indra representing respectively the freeing of dawn and the separating of air/sky/and earth.
I recall the Egyptian myth of creation where Noon, nothingness, was parted by Atum the creative principal. Shu the water was creted first then Tefnut the air.
The similarity is striking.