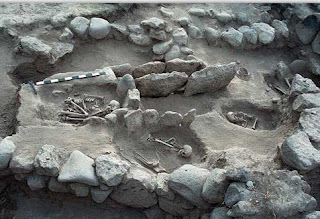 During the survey carried out in October 2003 the writers were able to identify several Stone and Bronze Ages sites in northern Armenia, some of which necessitate further investigations with the use of multidisciplinary technique.

East of the Lorian Reservoir, the slopes of the Somkhetian Ridge are crossed by the valleys of several streams. The deposits exposed in one of the valleys consist of the1 – 3 m thick talus, resting on the 0.2 – 0.3 m of the interbedded sandy loam, presumably of the riverine origin, and 0.4- 0.5 m of the light blue lacusrtine clay with the inclusion of angular pebbles. All these deposits rest on the dolerite basalt lava, which outcrops near the stream bed. Following up the valley of one of the streams we were able to identify several Early Stone Age tools. The talus exposed in the valley yielded a partial ovate Acheulean biface made of the dolerite lava. Further upstream, in the same deposits we picked up a sub-triangular Levallois flake. 100 meters downstream, in the lacustrine deposits, we collected a large fossilized tibia of a wild horse.

Pechka rock-shelter has been found in the limestone outcrops of the Somkhetian Ridge, near the village of Kruglaya-Shishka. The rock shelter is found on the left bank of the valley of a dry stream, 16 m above its bed, at the altitude of 1,680 m above the sea-level. The stream’s source is found on the slope of the Siskyatskaya Mnt., further to the north. Altogether 14 Stone Age artifacts have been collected on the slope of the valley immediately beneath the rock-shelter. By their technical features, 10 artefacts manufactured from the andesine and dacit, may be classified as Mousterian; they include an exhausted core, two blades, a flake, four points, side scraper, and an end-scalper. Four obsidian artifacts may be deemed as the Post-Palaeolithic: a double angular burin, a point, a retouched flake, and a retouched fragment.

Metsavan (Chakhmakhkar) ‘workshop’. The slopes of the Chakhmakhkar Mountain, east of Metsavan village, include outcrops of the medium quality flint. The entire south-western slope of this mountain was virtually littered with artifacts, made predominantly of the local flint. Judging from their typological features, they include both Mousterian and Post-Palaeolithic tools. The Mousterian assemblage consists of single-platform Levallois cores, Levallois flakes and blades (the latter made predominantly of the dacite rocks). The Post-Palaeolithic series consist of prismatic cores, end-scrapers, small-size points, notched and combined tools, and rarely include the obsidian implements. A rock-shelter of that name was identified in the lower part of the Metsaru River canyon, on its left bank, 40 m above the river bed, at the height of 1,630 m above the sea-level. On the floor of the cavity, a retouched fragment of an obsidian blade, possibly a fragment of a point, was found, together with small fragments of bones and fragments of medieval pottery.

A large prehistoric settlement was identified on the elevated terrace of the Ghergherchay River west of the Kurtan village. Judging by the observable structures and the finds of pottery this was a fortified settlement of Bronze and Early Iron Ages. 20 m thick exposures of Early Quaternary lake deposits is located near this settlement.

The site is located at the south-eastern bottom of the Pokr-Arteni Mountain, on a wide promontory formed by two canyons, 6 km to the south of the Satani-Dar, an Old Palaeolithic assemblage reported by Panichkina (1950), at the altitude of 1,310 m above sea-level. Numerous artefacts have been collected on the promontory’s higher level. Three typological groups were distinguished. The ‘Acheulean’ group, which is numerically inferior, includes a convergent side-scraper and two bifacial tools (a small hand-axe and a tool with a beak-like distal extremity). The ‘Mousterian’ group consists of a point, Levallois cores and flakes. The post-Palaeolithic group which is the most numerous includes end-scrapers, notched and beaked tools as well as blades with plain unprepared platforms. Judging from the partially removed old patina, the tools were often reshaped and reused.

The detritus, consisting of large angular rock waist and fragmented dacite, was found on the banks of a small (200 by 300 m) lake of Atka (Ettik-Gel), west of Khurda-Jalal Mountain, at the altitude of 1,830 m. Amongst the rocks with the traces of intentional flaking, cores, flakes as well as fully accomplished tools were identified.. The clear dominance of the Levallois-type flaking is remarkable. Thick and crude flakes with either plain or oblique unfaceted striking platforms were also noted. Amongst the tools which were not numerous, three simple side scrapers, one angular (déjeté) side-scraper, three points (including a Levallois point with a thinned base, and another one with the alternative retouch and a single notched tool) could be acknowledged. Most blanks and tools may be recognised as Mousterian, but two crude side scrapers and several flakes attest Acheulean features. All the artefacts were strongly weathered, with the archaic-looking ones being more strongly affected. Several slightly weathered obsidian artefacts, including one notched tool and three flakes, are deemed as Post-Palaeolithic.

The outcrops of the dacite lava are found on the banks of a river and its tributary in Sarashlinsky Yurt area, south of the Georgia’s border, at the height of 1,930 m above the sea-level. Several dacite rocks reveal traces of the intentional flaking. The artefacts include three exhausted cores and two side-scrapers, as well as numerous obsidian flakes. Apart of the above-mentioned sites in the northern part of the country, we were able to visit several sites in its central and southern parts.

This largest lake in the Caucasus with the surface 1,416 km2 and volume 58.5 km3 is located along the major fault-line. The Sevan Lake has a long history starting in the Pliocene. Its higher stands are acknowledgeable in the terraces located at 100-120, 80-90, 50-55, 38-40 and 18-20 m. The section of the latter, supposedly of the Upper Pleistocene age is visible near the prehistoric settlement of Kanagekh. The environmental changes that occurred during the Holocene are reflected in the 12 m thick sequence of lacustrine and riverine deposits exposed in the mouth of the Dznaget River in the lake’s south-eastern part (Sayadian 1985). Due to the artificial lowering of its level, which attained - 19.5m in 1998, about 20,000 hectares of its bottom became exposed. Archaeological surveys conducted on the dried up areas in the 1960s and 1970s identified several important Bronze Age sites, ranging in age between 6,000 and 2,000 BC, the time of the low stand of the lake-level. These include the Bronze Age ‘royal’ barrows at Lchashen and Norashen. Piliposyan excavated a group of rich Bronze Age burials with megalithic structures at Kanagekh, located on one of the Sevan’s lower terraces. A fortified settlement located near-by and so times.far not excavated includes layers ranging from the Neolithic until early Medieval epoch.

Aratashen. A multi-layered early agricultural sites located on the Ararat Plain, west of the town of Etchmiadzin. New excavations have exposed deposits attributable to the Aceramic Neolithic (Chastaigner 2002). They include several levels of oval-shaped circular structures, 3-4 m in diameter. The deposits include a rich obsidian industry, faunal remains of predominantly domestic animals (mostly sheep/goat and cattle), as well as cultivated plants (Triticum dicoccum, Hordeum vulgare, Lens culinaris, Vicia ervilla), with the full absence of pottery.

Zorakarer (Khoshundash), located near the town of Sisian in the southern part of Armenia, consists of several cemeteries ranging in age from the Bronze Age to the Urartian period. They include several hundreds of vertically positioned slabs forming regular rows. In one case we were able to identify a particular burial structure which included a burial chamber (crypt) covered with a ‘blind arch’ and connected to a corridor leading into a yard surrounded by a stone wall. It has been noted, that in several cases the slabs used in the newer structures were taken from the older graves.

The conducted survey raises several issues. First, it becomes obvious that contrary to the predominant view, northern Armenia is sufficiently rich in Old Stone Age sites, and hence been populated by the early Hominids at least since the Early Pleistocene. The site of Dmanisi in neighbouring Georgia, c. 40 miles north of the investigated area, includes the Homo erectus skeletal remains in the clear association with the Upper Villafranchian fauna and an archaic lithic industry, lies. At Dmanisi the fossiliferous deposits were found in the lake sediments which lie above the ‘Mashavera basalt’ with the radiometric age of 1.85±0.01 MA. On this basis, combined with the faunal evidence, and the hominid morphology, the age of the Dmanisi site is estimated as the MN 17/18 transition (Gabunia et al. 2000). The basalt lava exposed in the river valley at Metsavan equally belongs to the Mashavera unit. Consequently, the lake deposits from which stemmed the artefacts found at Metsavan were roughly contemporaneous with those which yielded the hominid remains and the archaic fauna at Dmanisi. These deposits were formed in a huge lake centred on the present-day Lorian Plain, and which full sequence is exposed near the village of Kurtan. Hence the new evidence supports the view that Armenia was part of the corridor via which early hominids were trekking from Africa into the Eurasian landmass.

This dispersal was following the common tectonic features that included the African Rift System and strike-slips and thrust-faulting in the area of the northern plate collision. Along these structures developed the landscapes, which became attractive for peripatetic hominids, with lakes rich in diverse and easily available food resources, and volcanoes providing in abundance easily manageable rocks. Our survey identified at least one cave site (Pechka) with the Mousterian industry. This implies a perspective occurrence of more stratified dwelling sites in the vicinity. The open-air assemblages or ‘workshops’ with the materials attestable as Acheulean, or Mousterian, or both, equally suggest an intensive Early and Middle Palaeolithic occupations with a probable occurrence of dwelling sites. The total absence of authentic Upper Palaeolithic assemblages is equally significant. Earlier writers (Panichkina 1950; Sardarian 1954) reported the finds of prismatic cores and blades with flat striking platforms which they identified as ‘Upper Palaeolithic’. In view or the recent experience all these tools may be classified as ‘Post-Palaeolithic’ within their probable age ranging from the Neolithic to Chalcolithic. This implies that, due to the severity of climatic conditions, the Armenia’s territory was totally abandoned by the humans during the Last Glacial Maximum and resettled again starting with the Neolithic.