The following two articles are about archaeological excavations within northern Syria that recently appeared in western news media. These archaeological discoveries are of great interest to this blog because the excavation sites in question are essentially along the southern periphery of the Armenian Highlands. The first news article posted below basically describes the prehistoric conflicts that is said to have existed between the "north" and the "south" at the time. It is very interesting that the author of the article essentially states that archaeologists are now "re-thinking" long held conventional wisdom that early civilization disseminated from Mesopotamia to Asia Minor (Armenian Highlands). The second article at the bottom of this page reports on a very interesting find close to the banks of the Tigris River in northern Syria (southern Armenian Highlands). The finding in question is said to be an eleven-thousand year old house with painted walls. These fascinating discoveries need to be looked at as an extension of the archaeological wealth coming out from the Armenian Highlands. 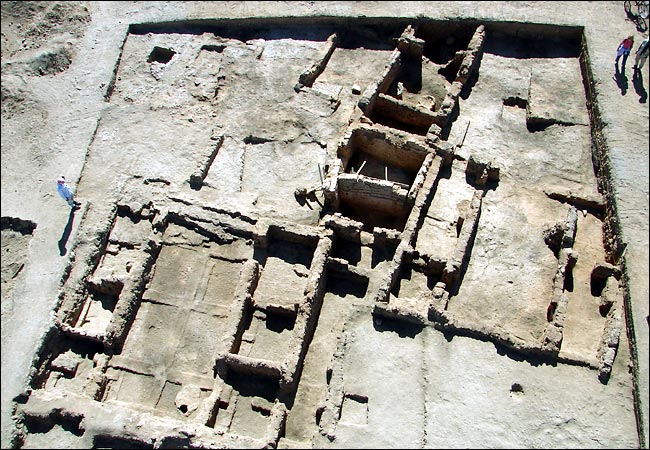 An excavation project on the Syrian-Iraqi border has uncovered an ancient settlement wiped out by invaders 5,500 years ago. Discovered in northeastern Syria, the ruined city of Hamoukar appears to have been a large city by 4,500 B.C., said archaeologists Clemens Reichel and Salam al-Quntar, who co-directed Syrian-American excavations on the site. Reichel, a research associate at the Oriental Institute of the University of Chicago, and al-Quntar, of the Syrian Department of Antiquities, jointly announced their discoveries on Thursday. They said Hamoukar was a flourishing urban center at a time when cities were thought to be relegated hundreds of miles to the south. The site is in the upper edges of the Tigris and Euphrates Valleys, near the Iraq border. Reichel said it may have been settled as long as 8,000 years ago. Scholars had long believed that urbanized societies started and were isolated in Uruk, in southern Mesopotamia. But excavations that started in 1999 at Hamoukar and at other sites in central Syria led to new ideas about the how urban culture spread in the region. Ancient Mesopotamia was a region that includes Iraq and parts of Syria. This year, the Syrian-American excavations discovered evidence of the battle that toppled and burned Hamoukar's walls and ended the city's independence. Researchers found that invaders likely hurled more than 1,200 sling-fired bullets at Hamoukar and more than 100 heavy, 4-inch clay balls. ''The whole area of our most recent excavation was a war zone,'' Reichel said. The ruins have preserved not only local pottery and artifacts, but also vast amounts of Uruk pottery. ''The picture is compelling,'' Reichel said. ''If the Uruk people weren't the ones firing the sling bullets, they certainly benefited from it. They took over this place right after its destruction.'' Reichel said if Hamoukar's residents were taken by surprise it will give researchers plenty to study because their possessions likely were buried with them under the debris.

The archaeologists, who announced the find yesterday, described it as the oldest known excavated site of large-scale organized warfare. It was a clash of northern and southern cultures in ancient Mesopotamia, the land where urban civilization began, in a region that includes Iraq and parts of Syria. The discovery was reported by Clemens Reichel of the Oriental Institute of the University of Chicago, who was co-director of the Syrian-American excavations at the site, known as Tell Hamoukar. The ruins are in the upper fringes of the Tigris and Euphrates Valleys, near the Iraq border and within sight of the Taurus Mountains of southern Turkey. "The whole area of our most recent excavation was a war zone," Dr. Reichel said in the announcement, made jointly by the University of Chicago and the Department of Antiquities in Syria. Earlier excavations at Hamoukar, begun in 1999, led to a reinterpretation of the spread of Mesopotamia's urban culture in the fourth millennium B.C. They showed that in some cases, the northern regions developed thriving cities independently of the better-known early southern cultures. It was previously thought that the culture had spread north through colonization, trade or conquest. The new research revealed that relations between north and south were not without major conflict.The archaeologists reported finding collapsed mud-brick walls that had undergone heavy bombardment and ensuing fire. All around, they collected more than 1,200 oval-shaped "bullets" used with slings and some 120 larger round clay balls. The layer of ruins from that time also held vast amounts of pottery from the Uruk culture of southern Mesopotamia. "The picture is compelling," Dr. Reichel said. "If the Uruk people weren't the ones firing the sling bullets, they certainly benefited from it. They took over this place right after its destruction."

Speaking by telephone from Damascus, Abdel-Razzaq Moaz, Syria's deputy minister of culture, said that Hamoukar was "one of the most important sites not only in the Middle East but in the Old World," and that the new discovery brought to light "a kind of turning point in the history of civilization." Dr. Moaz emphasized the site's contribution to the understanding of the rise of early cities, rather than the violent confrontations between the expanding cultures. Guillermo Algaze, an archaeologist at the University of California, San Diego, and an authority on Mesopotamian history, said recent finds and the new evidence of warfare were filling out the story of the expanding Mesopotamian culture. By 4000 B.C., Dr. Algaze said, the northern and southern regions appeared to be "equally poised for takeoff, but 500 years later, the south had taken off and the two were no longer equal." Hamoukar, he said, "fits this picture fairly well." Excavations by a British team show that Tell Brak, also in northern Syria, seems to have collapsed at about the same time. Dr. Algaze, who was not involved in the Hamoukar exploration, said the new evidence made it clear that "the southern expansion was accompanied by some conflict." One motivation, other archaeologists say, is that growing cities in the south sought raw materials like wood, stone and metals. As the excavation proceeds, Dr. Reichel said, the destruction of Hamoukar will give archaeologists a research advantage, especially if the besieged people were surprised. In that case, all of their possessions would presumably have been buried with them under the debris.

Such "frozen contexts," he said, are crucial for identifying the functions of buildings in a city that might have covered 80 acres. Archaeologists are beginning to distinguish among domestic dwellings, cooking or production sites and those for administrative or religious activities. Salam al-Quntar, an archaeologist with the Syrian Antiquities Department and Cambridge University in England, who is a co-director of the excavations, said the team was just getting started with investigations of the city's buried architecture. But the new excavations confirm earlier evidence that Hamoukar was a flourishing urban center by the middle of the fourth millennium B.C., before the southern Uruk culture began to dominate the region. Hamoukar's relations with the south at this time remain to be investigated more fully, Dr. Reichel said. Some of its buildings shared architectural similarities with those in southern urban centers. Dr. Algaze said it was not entirely clear from the excavations whether Hamoukar had collapsed or had been taken over as a result of war. "I cannot tell," he said, "but it seems to stand to reason that it's the latter."

French archaeologists have discovered an 11,000-year-old wall painting underground in northern Syria which they believe is the oldest in the world. The 2 square-meter painting, in red, black and white, was found at the Neolithic settlement of Djade al-Mughara on the Euphrates, northeast of the city of Aleppo, team leader Eric Coqueugniot told Reuters. "It looks like a modernist painting. Some of those who saw it have likened it to work by (Paul) Klee. Through carbon dating we established it is from around 9,000 B.C.," Coqueugniot said. "We found another painting next to it, but that won't be excavated until next year. It is slow work," said Coqueugniot, who works at France's National Centre for Scientific Research. Rectangles dominate the ancient painting, which formed part of an adobe circular wall of a large house with a wooden roof. The site has been excavated since the early 1990s.

The painting will be moved to Aleppo's museum next year, Coqueugniot said. Its red came from burnt hematite rock, crushed limestone formed the white and charcoal provided the black. The world's oldest painting on a constructed wall was one found in Turkey but that was dated 1,500 years after the one at Djade al-Mughara, according to Science magazine. The inhabitants of Djade al-Mughara lived off hunting and wild plants. They resembled modern day humans in looks but were not farmers or domesticated, Coqueugniot said. "There was a purpose in having the painting in what looked like a communal house, but we don't know it. The village was later abandoned and the house stuffed with mud," he said.

A large number of flints and weapons have been found at the site as well as human skeletons buried under houses. "This site is one of several Neolithic villages in modern day Syria and southern Turkey. They seem to have communicated with each other and had peaceful exchanges," Coqueugniot said. Mustafa Ali, a leading Syrian artist, said similar geometric design to that in the Djade al-Mughara painting found its way into art throughout the Levant and Persia, and can even be seen in carpets and kilims (rugs). "We must not lose sight that the painting is archaeological, but in a way it's also modern," he said. France is an important contributor to excavation efforts in Syria, where 120 teams are at work. Syria was at the crossroads of the ancient world and has thousands of mostly unexcavated archaeological sites. Swiss-German artist Paul Klee had links with the Bauhaus school and was important in the German modernist movement.