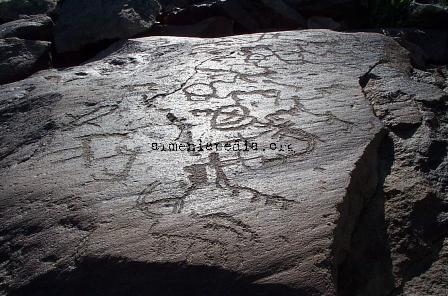 One of Armenia's least known and interesting attractions is the top of Ughtasar Mountain. Aside from the natural beauty of the mountaintop valley, the views and the small lake, there is an abundance of ancient petroglyphs aged between 4 to 7 thousand years old. Unfortunately, this is one of the most difficult places to reach, with a solid 4x4 needed and with no real roads leading up to it, compounded by a short visiting season.

Rock—carvings are a unique source for the study of ancient culture. Discovered on the territory of Armenia, they have been know as "Itsagir", i.e. goat-letters, and though they have attracted the attention of certain investigators at the beginning of the 20-th century they have not been studied at that time. The interest towards the monuments of rock-art grew during the first twenties of the 20th century, when A. Kalantar indulged himself to the study of rock-carvings. Unfortunately, very little has been preserved from the rich material collected by him. A. P. Deniyokhin also has taken part in the discovery ot rock-carvings in Armenia. During field studies the archaeologist S.H. Sardarian has discovered numerous rock carvings on the slopes of Aragats and the Gueghama mountains.

Groups of rock -carvings have also been found in Western Armenia. In 1966 we discovered exceptionally rich centres of rock-carvings in historical Syunik. The archaeological expedition of the Institute of Archaeology of the Armenian Academy of Sciences began its studies in Syunik in 1967—1968, and discovered a large amount of carvings on several thousand rocks in historical Syunik, i.e. in the regions of Sisian, Yeghegnadzor and Azizbekov. The collection of these rock-carvings arouses high interest in various specialists and especially in archaeologists. The present collection comprises only a small quantity of the materials gathered at Syunik, i.e. the main groups of rock-carvings of Ughtasar; the rest will be published gradually in the next volumes of this series. The recently discovered rock-art monuments occupy the territory of several dozens kilometres along the mountains near Tsghouk, on the slopes of Ughtasar, at the feet of Vartenis mountain—chain and the sources of Yeghegis, Arpa and Vorotan rivers.

The discovered rock-carvings are so numerous that it is not possible to include even the most necessary ones in one big volume. More than 2000 decorated rocks were discovered at Ughtasar, in the region of Sisian. The big centres of rock-carving art, Ughtasar and Jer'majur, are in the region of Sisian about 3300 metres above sealevel. Here, in the mountainous lawns where the cattle—breeders settle in summer, the soil is rich with the Alpian flora. Along the area, in the valleys and near the rock-chains as well as around the small lakes, we can see traces of ruined dwelling-sites, cromlechs and various graves. The study of these rock-carvings is possible only during summer months. Most of the time, nearly 9 mouths of the year, the rocks are covered with thick snow. The rock carvings are mostly on "tombstones" and these decorated rock-fragments are scattered at the feet of mountains, in valleys including the slopes and bottom of Ughtasar, which took its name after the resemblance it has with the camel ("ught" in Armenian means "camel"). The carvings are graphic and volumous and have been represented horizontally or vertically on the flat, brown and black rock—fragments.

The Cyclopean fortress and the lodgings situated over 3 kilometres high at Ughtasar, have, apparently, served as temporary dwelling sites for cattle-breeding tribes. The "graves" and their carvings prove that they were in use for many hundred years. Scenes of ceremonial dances, i.e. dances in pairs and collective dances, have been reproduced too. The rock-carvings of Syunik represent subject scenes, where single episodes of primitive people’s social life are depicted with the surrounding nature. These decorated rock-fragments of Syunik are mainly "tombstones" and they are made by cattle-breeding tribes who settled in those pastures at a certain period of the year. It is difficult for the investigators to determine the accurate date of these rock-carvings. The form, style and the theme of the execution of the rock-carvings may be of great importance in determining their date. The comparison of the monuments of material culture of Syunik and other regions of Armenia with those of the Transcaucasus and Asia Minor, gives us enough basis to consider the rock-carvings of Syunik as belonging to the V-II millenium B.C.

Sweet website, I hadn't come across arevordi.blogspot.com earlier in my searches!
Continue the wonderful work!