Origins of Human Civilization Within the Armenian Highlands - 2007

Origins of Human Civilization Within the Armenian Highlands 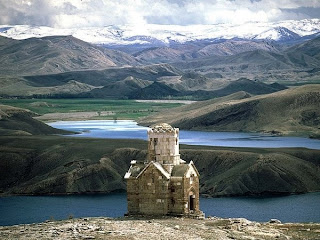 Basing my opinion on my exposure to Western research regarding human genetics, archaeology, anthropology, mythology/folklore and linguistics, I have come to the conclusion that early human civilization developed within the general vicinity of the Armenian Highlands: the territories which comprises Anatolia (modern Turkey), northern Mesopotamia (modern Iraq/Syria), northwestern Iran and the southern Caucasus. Putting aside theories propagated by self-serving eurocentric scholars within the west, one must realize that there is a large body of evidence that clearly points to the Armenian Highlands as the location where early man first entered the pages of history. According to many international scholars, the following statements are either accepted as corroborated facts yet to be disproved by other discoveries elsewhere, or likely speculations and/or theories that need to be corroborated through additional research. Thus, based on my evaluation of various scholarly and scientific disciplines, the vicinity of the Armenian Highlands is considered to be:

Unfortunately, there is still a lot of resistance and suspicion in western academia regarding the aforementioned claims. I believe that this opposition is essentially a result of eurocentric and/or ignorant attitudes found within academic circles in the west. Let us not forget that for several centuries, westerners thought ancient Egypt and Sumer were the earliest centers of advanced civilizations and that the origins of western culture was to be found within ancient Greece. As a result, westerners today may have a difficult time absorbing or processing information that puts the epicenter of prehistoric human civilization and the pre-Hellenic origins of western culture within the Armenian Highlands. In my opinion, if one does objective research and closely studies the evidences available today, it would not be too difficult to come to my stated conclusions. As of today, the most plausible location for the epicenter of prehistoric civilization is the Armenian Highlands. I will periodically post relative information about the ancient legacy of the Armenian Highlands to support this theory.

I thank you for every single article in your website
Great job!!!!!!!!
Arthur Tovmasyan

What the problem Turks and Turkism ?