Armenian Religion During the Pre-Christian Era - 2007

Armenian Religion During the Pre-Christian Era 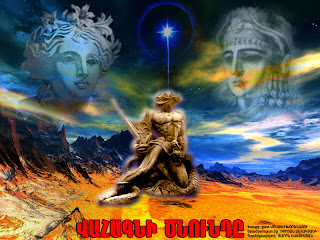 Similar to all the pre-historic nations, Armenians, during their Pre-Christian era worshiped the nature, the elements, spirits, eponymous and other legendary heroes and a number of gods. We can divide the Armenian pre-Christian era into three periods.

During this time, Armenians had nature gods and worshiped the elements. Consequently they worshiped.- The mountains. Armenia being mountainous, Armenians worshiped the mountains in a special way and particularly the volcanoes. Massis, Arakatz, Krkour, Gortuk, Nebad, Varak, Sipan and Nemrout are some of them. It is noteworthy that Armenians had devoted particular days of the months to the above mentioned "mountain-gods". The trees and the flowers. Special place among Armenians' nature gods had the poplar and the plane-tree. The worship of the plane-tree had a special significance for Armenians.

In the valley of Mount Ararat (near Armavir city) a wood of plane-trees was planted, which unfortunately has not been preserved till nowadays. Armenians believed, that their priests (Kourms) could foretell the future or that they could communicate with the spirits of their ancestors by listening to the rustling of leaves. The offer of royal family boys to the plane-tree, called "sosanver", is also mentioned The water. Armenia also being full of water Armenians worshiped the very essential element for life, water.

They worshiped the rain, the flood, the water spring, the river, the lake and the sea. The lakes Sevan and Van and the rivers Arax, Yeprad, Dikris, Tzorokh and Gour were some of the worshiped "nature gods". The animals. Some of the animals worshiped by Armenians are the sheep, the pig, the cow, the horse, the dog, the cat, the mouse, the frog, the eagle, the crane, the stork, the swallow, the chicken, the xxxx, the lion, the bear, the wolf, the bull and the snake or dragon. The sun and the moon. Armenians had so deep faith to the sun that even after their conversion to Christianity they continued worshipping the sun, for some time. The planets and the stars. Together with the sun and the moon, Armenians worshiped the rest of the planets of the solar system, naming the days of the week after them. Armenians worshiped also our galaxy -the Milky Way-, and the rainbow. During this period the Armenians paid their respects mostly in the forest.

Period of spirits' and heroes' worship:

In the following centuries the Armenians started worshipping invisible and imaginary spirits and heroes. According to the Armenians these spirits belonged to their ancestors and to various nature elements and they were distinguished to "good" and "evil". They lived in water or on land having human, animal or both human and animal appearance. "The Braves", were good spirits. The most famous of them were those who inhabited at the foot of Massis (an other name for Mt. Ararat) and were vengeful spirits against bad people. The Haralez (Arlez or Aralez), were good spirits, having dog-form appearance who, by licking the wounds of dead brave soldiers, brought them back to life.

The Armenians continued worshipping the "Haralez"s for some time even after their conversion to Christianity. The Vishap (Dragon), was an evil and harmful spirit having various appearances.(Big snake, big fish) The Haverzahars, the nymphs, were good spirits protecting the women. They lived in beautiful places. Beside the mentioned spirits, the Armenians also worshiped others such as the.- Barig, Bai, Hamparou, Nhunk and Shahabed. In time, after the conversion to Christianity at 301AD, the spirits turned to either angels or demons.

During the 5th century BC Armenians adopted the Iranian form of these divinities and domesticated them. The principal gods Armenians worshiped were.- Aramazd, the father of the gods, the creator of the sky and the earth. Anahid, daughter of Aramazd, goddess of fertility and maternity, mother of all prudence and virtues. She was the favorite goddess of the Armenians. Her statue in Yeriza was golden. Vahakn, the god of fire, power and bravery. These three divinities constituted the "trinity". Mihr (of iranian origin), the son of Aramazd, god of light and sun. Dir, the god of rain.

He was also the scribe of Aramazd and the messenger of the gods. He was mosthe messenger of the gods. He was most likely the god of literature, science and the recorder of man's deeds of good and evil. One of his duties was to record the dead and take them near Aramazd. Astghik, the goddess of water, beauty, love and fertility. She was the mistress of Vahakn. Armenians used to celebrate, in order to honor Astghik, they offered her roses (vart in Armenian - therefore the celebration was called "Vartavar"), they let doves fly and sprinkled water on each other. Armenians still celebrate "Vartavar", having adopted it to a christian custom.

Nanne, daughter of Aramazd and the goddess of the sky, she Aramazd and the goddess of the sky, she represented the mind and the bravery. Parshamin (of syrian origin), the god of the sky and Vanadour, the god of germination and fruit bearing. During this period, Armenians built temples the "mehian"s. In these temples there were statues of the god or goddess for whom the temple was built, and in front of the statues there was the altar, called Pakin, where offerings were made to the god or goddess. There was also a special place called kantsaran (something more or less like a safe), where the gifts from the people were kept.

The priests were called kourm. In Armenia there were a lot of temples. However, only seven of them were the most famous. Armenians gathered there every year to worship. Those are The Temple of Aramazd, in Ani and Pakavan, the Temple of Anahid, in Yeriza and Ardashad, the Temple of Mihr, in Pakaraidz, the Temple of Dir, in Yerazamuin, the Temple of Astghik, in Ashdishad, where there were also the Temples of Vahakn and Anahid, the Temple of Nane, in Til and the statue of Parshamin in Tortan. All these temples were ruined during the 4th century by St. Gregory the Illuminator.