The historic significance of the Urartian era Musasir Temple is fundamentally this: the Greco-Roman looking architecture in question preceded the earliest Greco-Roman style constructions by hundreds of years. The Musasir Temple is yet another clear indicator that the advanced culture of the Armenian Highlands radiated far beyond its boundaries. Ancient civilizations such as the Minoans, who germinated Greek culture, and the Etruscans, who germinated Roman culture, trace their origin to within the vicinity of the Armenian Highlands.

***
The Great Musasir Temple of Armenia 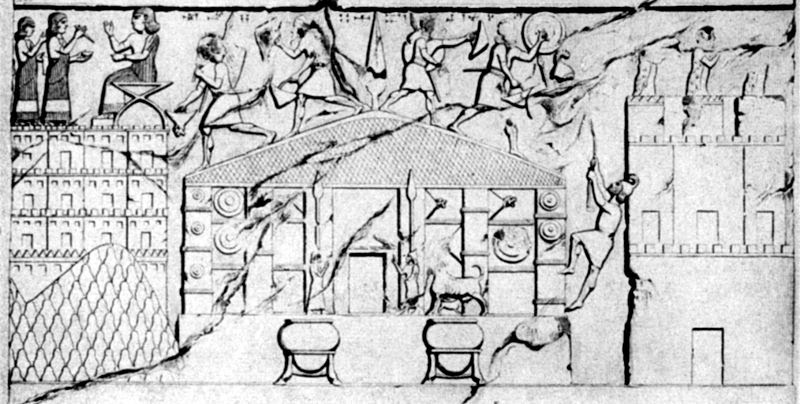 IN 1843, an archeological team under the leadership of Paul-Emile Botta and sponsored by the French government, excavated a large mound in Khorsabad about fifteen miles northeast of Nineveh. At this site, the first of the Assyrian palaces was to be discovered covering an entire city within walls a mile long. A monumental palace was built by Sargon II, who ruled from 721 to 705 BC, on a scale never till then attempted by an Assyrian monarch. This structure was created with utmost care and splendor and was called Dur Sharrukin or "Sargon's Fortress". The results of Botta's excavations were published in a sumptuous edition! with ample funds provided by the French government and now an expensive rarity. During the early 1850's, the British Assyrian Excavation Fund entered the field under William Kennett Loftus and many antiquities and accurate drawings of wall sculptures were apportioned between the British Museum and the Louvre.

However, a bas-relief destined for Paris forming part of an illstarred convoy of antiquities was attacked by Arab robbers while being shipped down the Tigris River, and today lies buried somewhere in the bed of that river. Fortunately that particular bas-relief was copied at its original location in the palace onto a drawing by Eugene Flandin(2) as Botta's chief artist. During this period of Assyrian campaigns, the northern Araratian regions were governed by Sardour -and later by his son Rusa (Hrachya, according to Movses Khorenatsi) with the capital at Toushpa (Tosp) located near the great city and the capital of the mighty Kingdom of Ararat, Van (Biaina) on the eastern shore of Lake Van. Sardour placed Urzana as the governor of the spiritual center of Ararat, Musasir.

We gather from the Louvre texts that in the summer of 714 BC, Sargon with a great army crossed the Kurdish mountains towards Lake Urmia, swept through the Araratian cities in the area and then turned westward into the land of Nairi, south of Lake Van. For good reason (knowing that many of his Assyrian predecors were thrown back from the gates of Van), Sargon by-passed Tushpa and marched around the northern and western reaches of the lake and stealthily attacked Musasir, throwing the entire countryside into panic and confusion. King Urzana and his retinue fled into the mountains, leaving the victorious Assyrians to overrun the city and capture the palace of the ruler with its store-rooms filled with immense treasure. He then entered the temple of the god Haldi (Khaldi) where even greater beauty was found.

The list of valuables has been catalogued in the Louvre text(3) and it defies imagination and comprehension. It is sufficient to state that King Rusa had assembled the greater part of the treasures of Ararat (Urartu) in Musasir for safe-keeping under the care of his hand-picked ruler Urzana, to thwart the greedy appetite of the mighty Assyrian king. Indeed, the treasures of the Egyptian Tutankhamen discovered in the 1920's pales into insignificance when compared with the fantastic wealth that Sargon carried back to Assyria to record in text and bas-relief in the capital of Assur and the palace at Dur-Sharrukin.

Fortunately, the boastful inscriptions and wall paintings of the military monarch have preserved for us the nature of the high culture of Ararat, which otherwise would have never seen the light of day. It has been stated that when Hrousha (Rusa) learned of the destruction and pillaging of Musasir and the abduction of his god Haldi, commited suicide.

And now, in the year 1986 or 2,700 years later, the author of this article has the audacity to claim that Musasir deserves the attention of the architectural world for no other reason than the preservation of the drawing of the temple by Flandin which accompanies the dissertation. Please look at the drawing and follow my line of reasoning. Here we see the oldest of the temples Ararat which, according to reliable sources, was built around 825 BC in the city of Musasir, which can be located with some certainty in the area between lakes Van and Urmia, in Historic Armenia.(4) It depicts the pillaging of this temple erected to the warrior God Haldi by the soldiers of Sargon's army, but our concern at this moment is not in robbery but in artistry.

Notice the pitched or gabled roof of either wood or stone, the vertical triangular end from eaves to ridge of roof with a high pediment. The portico or facade has six columns or piers or pilasters, if you will. The effect is definitely like a Greek temple similar to the Partheonon in Athens with which everyone is familiar. That Greek edifice was built around the year 500 BC or 425 years later than the Armenian temple of our Araratian forefathers.

Up till now, no monument has been found in Mesopotamia similar to the Musasir temple except in Asia Minor. In Phrygia, during the 8th to the 5th centuries, great facades were carved on rock-cut faces representing temples for the cult of the Great Mother. These too became the prototypes for the classical Greek temples.

However one approaches this problem, what the Musasir monument does show is the affinity of Armenian architecture in the ninth century BC, with the architecture of Asia Minor and of Greece - an important fact, since Armenia at a later date was under Mesopotamian influence. This fact was attested to by K. J. Basmadjian's(5) the editor of Panaser and a member of the Societe Asiatique in 1903. In writing to the Society he says, "My strongest argument is the similarity of the pediment of both the Parthenon and that of the temple of Musasir. In both cases exactly the same triangle is preserved. The oldest monument in the world having this triangular pediment is the temple of Musasir. Neither Assyria nor Babylonia, the two great powers which have always been in touch with the Araratians, have ever had this triangular form. From Armenia it was evidently transmitted to Phrygia and Lydia, and through these countries it was introduced to Athens, and afterwards back to Persia... the temple was probably constructed during the reign of Ishpuhini (828-784 BC), king of Ararat (Urartu) , for this was the first king who marched upon Musasir and conquered it "(6).

If further proof is needed that the temple is not an isolated instance in point, then let us glance to the other bas-relief which is plate number 114 in Volume II of Botta's monumental work. Here we also see for the first time anywhere, the Armenian kiosk or "pleasurehouse" on the margin of a lake. Notice the columns or pillars strongly resembling those of the Ionic order in Greek architecture. Since 1959, the Historical Society and the Department of Antiquities have conducted excavations in the Yerznka area, west of Karin. Here at Altintepe was revealed an Araratian temple and other monuments.(7) It is significant to point out that although only the foundations of the temple are in view, this shrine to the god Haldi (Khaldi), located in the Ararat confederation of Haiasa, the heartland of Hai forefathers, contained many treasures very much alike those described by the bas-reliefs of the Assyrian king Sargon II.